A grid-tied solar system with battery backup is most useful if you live in an area where the electrical grid is unreliable, repairs to the grid tend to take a long time, or extreme weather events are common.

A grid-tied solar power system with battery backup is also known as a "hybrid solar system" because it provides a hybrid of the benefits of grid tie solar - using clean, renewable solar power as your primary source of electricity and selling excess power to the utility through net metering - with the benefits of off-grid solar - having home battery storage to power your critical loads when the grid goes down.

That home battery storage is where most of the cost is, so in a grid-tied solar system with battery backup, the battery bank is usually not large enough to power the whole house during a grid outage. Instead, you must identify the loads you need available when the grid goes down (i.e. refrigerator, well pump, modem, and a few lights and outlets); these critical loads are then used to determine how much home battery storage is needed for your system. This is because - unlike an off-grid solar power system, which needs to be able to run an entire home off battery storage for several days during periods of no sun - a hybrid solar system's battery storage only needs to get you through the duration of a grid outage, which typically lasts on the order of hours, not days.

You will sometimes see the term hybrid solar system used to describe a renewable energy system that uses wind and/or hydro power in addition to solar power, but here when we talk about hybrid solar systems, we are talking about grid-tied solar power systems that also include home battery storage.

Are you a DIYer? Check out our Hybrid Solar System Kits, complete with all major system components, schematics, and FREE SHIPPING!

Want to get exactly the right amount of power? Let us give you a free quote for a battery backup system custom sized and designed for your specific application.

There are two ways to do this - AC Coupling and DC Coupling - and both require adding a new hybrid inverter to your existing solar system. Click below to learn more about the differences between the two coupling solutions.

With AC Coupling when the grid goes down, your new hybrid inverter automatically disconnects your system from the grid and uses your solar or battery bank to power your critical loads - essentially operating as a code-compliant off-grid solar system.

With DC Coupling, some of your solar power is routed through an MPPT charge controller to charge your batteries. When the grid goes down, your grid-tie inverter disconnects itself from the grid and your new hybrid inverter takes over, drawing from the batteries to power your critical loads.

Confused about AC/DC Coupling? Check out our FAQ and video below. 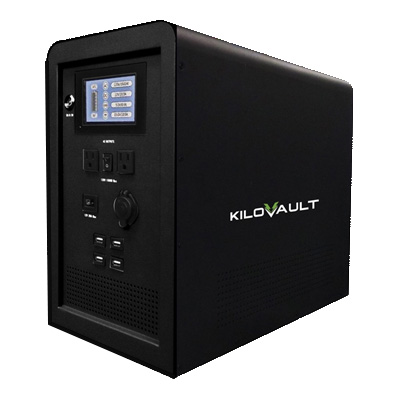 Whether or not you have (or even want) solar power at home, having a source of emergency power is a great idea. Our portable power banks are an easy way to acheive that. Completely independent of your grid-tied solar system, this method of battery backup doesn't automatically activate; it's an emergency power source you can plug your critical appliances into during a power outage. While energy capacities are lower than you'd usually have with a true grid-tied solar system with battery backup, a standalone home battery storage solution like these are less expensive and portable - great for true emergencies.

Will I lose power during a grid outage?

No! A grid-tie solar system with battery backup is designed with exactly this situation in mind. In fact, adding home battery storage to a grid-tied solar system is most useful for people who live in areas where either the grid is unreliable and goes down frequently or extreme weather events are common.

I already have a grid tie solar system. Can I add batteries to it?

Yes! Battery storage can be retrofitted to an existing PV system. Usually in this case the AC Coupling method is used, and to achieve it, you will need a few new major system components — specifically a hybrid inverter, a battery bank for storage, and a second breaker box for your critical loads.

The video here does a great job of explaining visually the differences between the two, as well as the pros and cons of each.

How much battery storage do I need?

Typically, battery backup capacity for a grid-tied system is limited to the number of kilowatt-hours (kWh) needed to power the critical loads you don't want to be without during a grid outage. Use our Solar Load Calculator - inputting only what you determine are your critical loads - to figure out how much battery storage you need (divide your total Watt-hours per day by 1000 to get kWh per day).

I have more questions...